A thief and his friend

After Melanie's arrival, we stayed a couple of days in Arusha in order to finish fitting the van and do some shopping. Where we were staying, there is a fenced compound and a security agent watching the premise. Knowing this, we were pretty confident to be able to work on the vehicle without worrying about thieves.

Thus, we put out all the equipment in order to make an inventory and sort them in the storage compartments under the bed. With all the equipment outside, we were paying attention for any intruders that could get in the compound where we worked. At the end of the morning, a young man comes in to ask for some water. Immediately, I recognized a scam and told him he should not be there. With communication problems often encountered in such a trip, I directed him toward the security agent so that he may ask him some water. I watched him until he started talking to the staff. From this moment, I told myself that the staff or the security agent will give him water and then escort him out of the place, or at least watch him. Well, I forgot about the guy and with Melanie with kept working on fitting the van.

Later in the afternoon, Melanie notices that she is missing a small black bag. After looking throughout the van and on the ground where we put all our stuff, we had to conclude that the bag has been stolen. Melanie, a few months before, had this bag stolen from her while in Spain (the car she rented was broken into four times). Like in Spain, the stolen bag didn't contain any money, camera or credit card, but some important items such as drugs against malaria and other very personal items; these items have little value for a thief, but are very important for a traveller. Prescription drugs are very hard to get since they are quite hard to find in Africa and quality can be quite low. Of course, Melanie was very upset about this bag being stolen once more. We were upset about the thief but also against ourselves for not closing the front door...

We talk about this incident with the staff and they tell us that they are going to watch the security videos as soon as possible. Being in Africa, we don't expect the cameras to have caught anything worth considering. We didn't believe that the camera could have worked. We will know about it only the next day since the person knowing how to handle the video recording is not on duty.

The next day, Sister Rosa (a nun) invites us to watch the surveillance video and to our great surprise, the cameras worked and caught the thief in action. Unfortunately, we can distinguish the thief's face so that someone may recognize him. We then learn that the thief, after asking for water, has stayed on the compound and keep a watch on us and every move we made. At the right time, he moved toward the van and stole Melanie's bag. 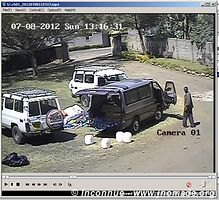 The thief is getting close. 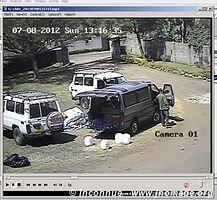 He takes the bag. 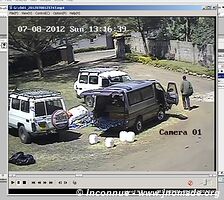 He leaves without anybody noticing.
The thief in action, caught by a surveillance camera in the Center House compound.

While we were watching the video, Sister Rosa is angry at the thief and tells us she wished she had a gun. Melanie and I looked at each other in surprise and then we look at the nun a little dazed. She tells us that she would not have killed him, but just shot him in the legs, and then she starts laughing. Thieves in Tanzania (and in Africa) can be treated very harshly by the mob if they get caught red-handed. They can be beaten to death in some cases. Thus, a bullet in the leg is probably 'gentler' than other options.

The next day, not being able to recognize the thief, we thought about going for a walk in the neighborhood just in case we can find the bag. The idea is that a thief, not finding anything of value in the bag, could toss it away on the side of the road. Of course, we don't find anything and after 15-20 minutes of walking. After being back, we meet the security chief and we are being told that the staff will work on that. We don't have too many illusions and we are pretty sure that the bag is gone forever. But after around 10 minutes, Sister Rosa come to see us and ask what are our full names...

We give her our names and she gives us back a wallet with a credit card to my name and a card that belongs to Melanie. They are expired cards we keep in a false wallet when we go in a dodgy area. Surprised to see this wallet, we notice that a young man brought it back to the staff. The man in charge of security start asking him questions about what happened. The young man tells him that the day before, he saw a man running with a bag and that he looked suspicious. Running behind him and shouting so that he stops, he manages to recover this false wallet that the thief had dropped. Melanie and I congratulate him for his action and we are happy with the effort he made. The security man continues asking him questions and the young man seems to be often repeating his history. It is going on in Swahili so we don't really understand. However, after some time, the security man grabs him by the shoulder and throw him on the ground (he is not very gentle). He searches him and he finds something else belonging to Melanie (a lip balm bought in Spain). From that moment on, we are quite a bit puzzled and tell the security man this youngster is not the thief (remember that he asked us for water the day before, we knew his face). Other people from staff came to join in. Melanie tells again to the security man that the thief is another person but he makes us understand that he understands what we were saying but at the same time to let him do his job...

If it is not the thief, who is he? Like I told you, thieve are treated badly in Africa and after being beaten and thrown to the ground a few times, his story start to change. During that time we find it hard (especially Melanie who feels very bad about it) to see the guy being beaten especially that we thought it could be a mistake. Anyway, we are in a foreign culture with people who know what there are doing (the security staff), and Sister Rosa tells us to let them do their job. Moreover, the young man is begging us to help him by saying that he is innocent. Please note that even through the guy is being beaten, he is not losing blood or anywhere near dying. He is taking punishment in a surprising way and won't be permanently hut, but he will have some big bruises.

After an hour or two and police intervention, the young man end up saying where the bag is and the police goes at that place (we stay at the house with Sister Rosa). The young man was a friend of the thief and came to see us hoping to get a reward for bringing back the wallet. He probably didn't know that it contained expired cards. When he saw us walk around the compound where we are staying, he probably got the idea to try a scam. When one thinks about it, it was suspicious. Why come the next day if he found the wallet the day before? Why keep something else in his pocket (the lip balm)? Why tell he was a teacher when clearly he was dressed too poorly to be one?

After the police returned, the bag is given back with almost all the drugs. Only some earrings and a few items of little value are missing. Prescription drugs are all there and were not damaged or contaminated.

Subsequently, we went to the police station. We waited for the paperwork to be completed at a counter and during that time the thief's friend was being searched and thrown in jail just 1-2 metres in front of us. We also see two other persons being searched and thrown in prison. The young man asks us for the last time to help him. It was a weird experience to see that right in front of us.

This story ends up nicely for the most part. Melanie got all her important drugs back. In fact, the story is not entirely finished...

The next day, the young man's mother comes to see us. We don't understand what is going on and Sister Rosa asks us if you want to drop the case (the charge?). We accept without knowing what will happen next. Later on, at lunch time, we go to a small local restaurant and we see once more the mom who works there. She serves us like nothing has ever happened. We don't know what happened to the young man. Did he stay in prison?