During my first trip (Tanzania 2011), the vehicle did not contain a bed, nor any storage compartments for equipment and food (see Vehicle introduction). For this trip of nearly 8 months in East Africa, I tried to build a more comfortable home. The idea was quite simple, but realizing it would be much more complicated than anticipated.

The final result is quite satisfactory, but I hope that the design will stand the rough roads of Africa. I thereby present you how the bed and storage was built as well as the many problems experienced. 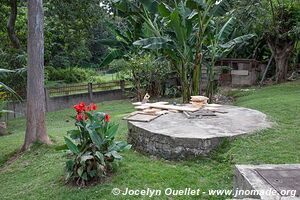 In 2011, when I was in Tanzania, I had decided to work with a carpenter to help me build the bed. However, with language problems right from the start, I changed my strategy.

I stayed in a place managed by the Arusha Catholic Archdiocese. I am able to park the vehicle and build the bed and storage at my own speed. The place is very nice and the small room I rent offers great views on Mount Meru. There is a large fenced land constantly guarded by a security officer. The compound contains several buildings to house travellers and volunteers, a big parking lot, a big backyard and some domestic animals. 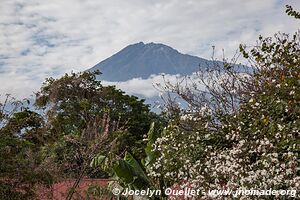 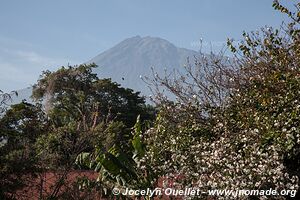 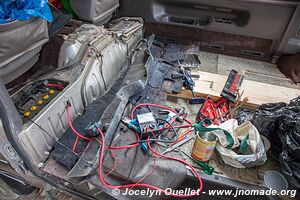 The first step consisted in connecting a second battery. This battery is used for lighting and electronic equipment and it recharges automatically when the car is running. One advantage of such a system is the fact that the battery stay in charge all the time.

The quality of batteries that can be bought in Tanzania is very different than home; after 1 month, such a battery is almost completely discharged. In Quebec, after more than 6 months, it is possible to plug in a battery and start the car. 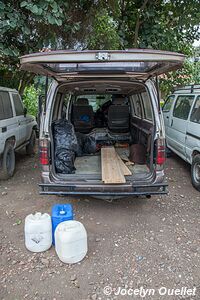 The start of construction.

Thereafter, I bought timber for building the bed. In Tanzania, one cannot find nice 4 x 8 feet plywood, but only panels of 26 cm by 5 metres long. These panels are very thick and must be worked on a planer to thin them. Problems started at this point.

In addition to working with panels that are not larger than 26 cm, each panel has a different width (between 24 and 27 cm). Also, all the panels had a variable width; at one end 25 cm, at the other 26 cm. Thus, no right angle was available to start working easily. 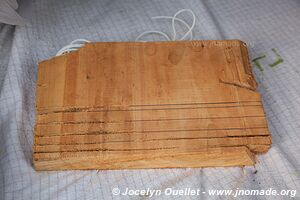 Testing the saw, nothing is going right.

After buying a wood saw that seemed good, I notice that nothing is going right. The saw is not cutting properly, and I cannot cut in a straight line. And no, it is not only a problem with me. With the help of Thomas, one of the young men working where I am staying, we succeeded in solving the problem of the saw.

All teeth on the saw are slightly bent alternately; one on the right, one on the left... Thus, with a nail, a hammer and my aid (not much), we bent each of the saw's tooth one by one. Then, we sharpened each of them. So, after almost 3 hours of work, I got a working saw. 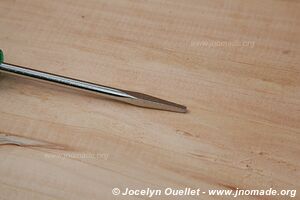 I would never have thought of making a story about a screwdriver, but hey, it is Africa and life is different. Before leaving Quebec, I had bought plenty of hardware to build the bed and storage that I wanted once I reached Tanzania. I bought right-angle brackets and many screws (more than 200). At home, nobody thinks too much if the screw drive is slot, cross or square. I choose square without thinking too much about it.

Eventually I find a hardware shop with people willing to help me solve my problem since I didn't want to buy again $100 worth of screws. These people found a tool for me as shown in the opposite photo, which is a sort of tool for punching holes. The head had a sharp cone point, but with a square base. Armed with this tool and a flat file, I spent almost 3 hours grinding this tool in order to transform it in a square screwdriver.

That was just a screwdriver story... More than 5 hours of work and shopping only to get a proper screwdriver. Mama mia!!! And I won't talk about the several blisters I got on my hands with this screwdriver that has a handle a little bit too small for the work I had to do. 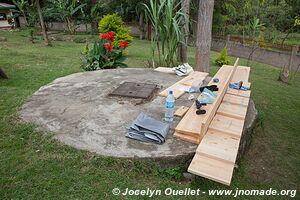 The bed frame, after 4 days. 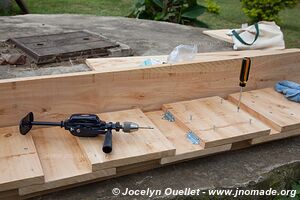 The hand drill on the bed frame.

As I mentioned above, no panels had proper right angles. I managed to align each panel as best as I could (see photo). I have alternated panels to make the bed frame. It is more work than I previously expected, but it allowed me to solve the problem of panels of different sizes. Everything has been done manually, hundreds of holes made with a hand drill for the numerous screws I installed. 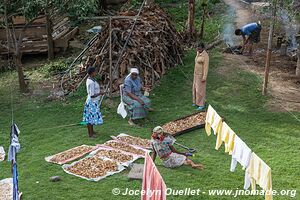 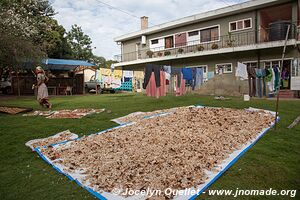 Life goes on where I am staying. Here, the people are preparing bread that will be mixed with pig food. A few metres away, I continue working on the vehicle. 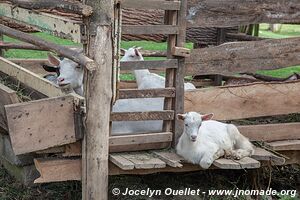 Goats on the site.

Here are the results after almost 2 weeks of work (yes, with a few days off). At the compound, there was a group of students studying in the medical field (doctor, nurse, dentist) that cheered me up in my efforts. I had many good moments with them and they helped relax at the end of a day spent sawing or assembling panels. I salute them all; there were Cindy, Neha, Julia, Alena, Bethany, Dylan, Odion and Aaron. 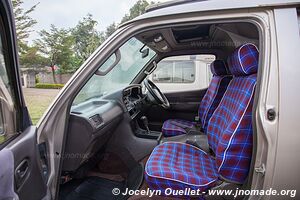 In the front, I put back the seat covers. 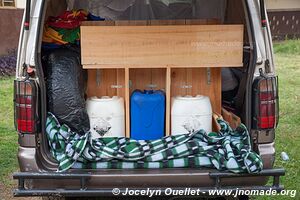 3 diesel tanks and a storage bin for equipment. 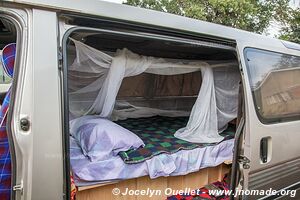 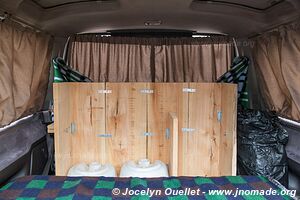 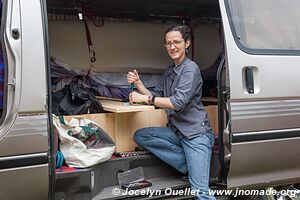 Some adjustments after Melanie's arrival. 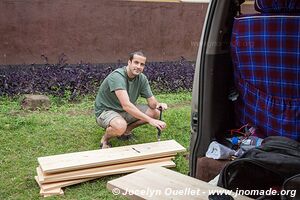 Melanie brought some equipment to finish the bed and storage. 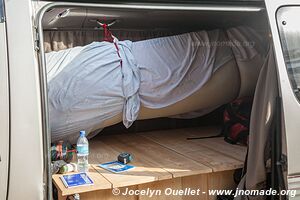 During the day, the mattress is rolled up to protect it from dust. 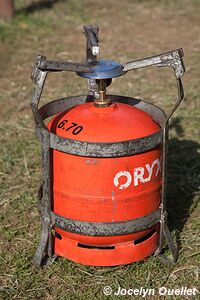 We tried our small MSR stove with the fuel available locally: diesel. It is the only fuel that can be found for this type of stove. One test convinced us to opt for a different system, a propane/butane stove made in Tanzania. Diesel smells very bad and leaves black soot on the stove and pots. Just filling the stove's bottle leaves a bad smell in the camping, a smell that we didn't want while preparing meals.

This small stove should last us 1 month since we are going to eat often in small local joint. In fact, it is cheaper to eat out than buying your own food. Of course, variety is quite low since food on the street is quite plain.