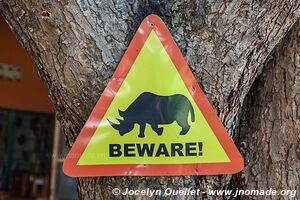 In Uganda, there is no more rhinoceros in the wild. Two species of rhinos were living in the countries: the white rhinoceros and the black rhinoceros. In 1982, both species disappeared because of poaching, armed conflicts and habitat destruction.

In 2005, the sanctuary was created and a total of 6 rhinos were imported. Four rhinos came from Kenya (neighbour country) and two from a zoo in United States. Only white rhinos were introduced in the sanctuary. As of October 2012, there are 12 rhinos in the sanctuary; 6 babies were born since 2009 (this is impressive). The sanctuary could support a population of up to about 50 rhinos. 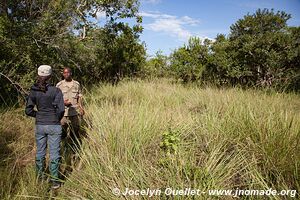 Melanie with our guide.

A good part of the financing comes from tourism. Indeed, it is possible to walk in the sanctuary, accompanied by a guide, in order to see some rhinos. It is very exciting to track such an animal without being confined to a vehicle.

I mentioned that only white rhinos were present in the sanctuary. The reason is that this specie is not dangerous for humans. Indeed, the white rhino can be approached up to just a few metres without any problems. On the other hand, the black rhino is very aggressive and would charge almost every time. With a weight of around 1.5 tons, a black rhino can very easily kill a person.

We went to see a female rhino and its young. The mother is called Nandi and is 13 years old; it comes from the United State. She got a first baby in June 2009, named Obama (yes, the same name as the American president, since the father rhino comes from Kenya... like President Obama). We met Nandi's 2nd baby, born in June 2011, and called Malaika which means “angel”. 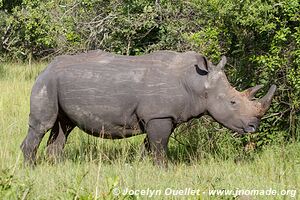 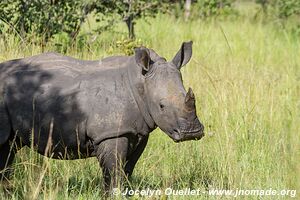 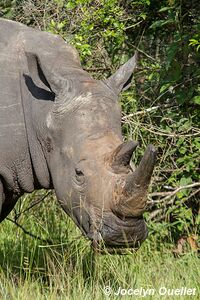 The main differences, between white and black rhinos, are as follows.

Back to visited regions
Next post
On the road #2
(Uganda)