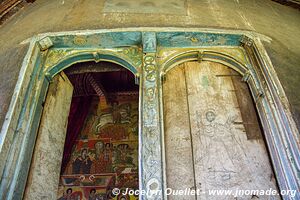 The religion in Ethiopia is very present in everyday life. Ethiopians seems to be very religious, and there are an astonishing number of churches everywhere in the country. Although the religion of this country is partly similar to what the Catholics believe, it is at the same time different in several key areas.

Similar aspects to Catholicism are beliefs in the Trinity (Jesus, God and the Holy Spirit), angels, saints and the devil. The worship of the Virgin Mary is very strong.

However, even if some aspects are similar, the way to participate to the church is different on several points. For example, dates do not match those that we know. Ethiopia follows the Julian calendar that starts 7 years before our calendar. So, in Ethiopia it is presently year 2007 instead of 2014. Moreover, months are not the same length as those in our calendar. The calendar has 355 days spread over 12 months with an intercalary month (an additional month) every 2 years. It is for this reason that it is said that Ethiopia has 13 months of sunshine a year. For us, Christmas is on December 25th, for Ethiopians, it is the equivalent of January 7th in our calendar. A little bit complicated, isn't it?

If dates are complicated, hours are also complicated. In Ethiopia, the hour 12 corresponds to six in the morning for us. Thus, when it is 1 o'clock (during the day) in Ethiopia, it is 7 o'clock for us. In the evening at 18 hours, Ethiopians restart counting from 12. Thus, midnight is 6 hours in the evening for them.

Ancients religious texts are written in Geez while new ones are in Amharic; two languages that seem to be very complicated. A hard-core believer must be fast 250 days each year (no meat). A vast majority of the population seems to be very strong believers. It is quite common to see people praying, being blessed by a priest in the street or to kiss the entrance portal to a church.

This religion is mostly based on the Old Testament and very little on the New One. Saints are also different than those of the Catholics. For example, there are major saints among which the most famous is St-Georges... who has an excellent beer with its name.

Another fascinating aspect of this religion is the myth that says the Arch of the Covenant holding the Ten Commandments given to Moses is to be found somewhere in Ethiopia. Many churches or monasteries in Ethiopia claim to have the Ark of Covenant under their roof or that it has once been held there. Since nobody can enter the heart of those churches, it is difficult to validate the information.

The isolation of Ethiopia during several centuries and the unique feature of their beliefs make this country a fascinating place to explore the various facets of this religion. The old rock-hewn churches are magnificent as well as the paintings in those churches and in the more modern ones. In several posts on Ethiopia, the topic of religion will occur frequently. You will see that religion, like in many countries, has stimulated the people in creating fantastic monuments of all sorts dedicated to God, the Virgin Mary and to the Ethiopian Saints. 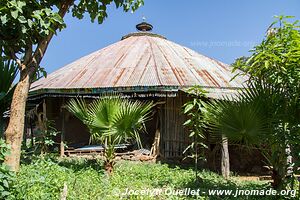 Several Ethiopian churches look very modest on the outside. But it is misleading; interiors often contain superb paintings that may date from a few years to several centuries.

Ura Kidane Meret Church contains some very nice paintings dating from the 18th to the 20th century. The paintings show biblical and historical scenes. The drawing concerns, among others, the saints, the Virgin Mary, the devil, believers and infidels. You will notice that sometimes, some scenes are bloody. 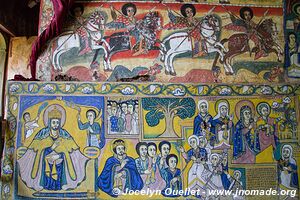 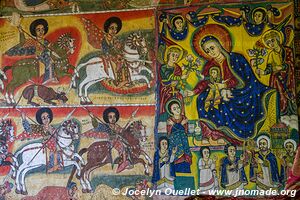 The paintings are made on linen glued to the wall. Their restoration would be extremely difficult since the linens are very delicate as are the walls to some extent. 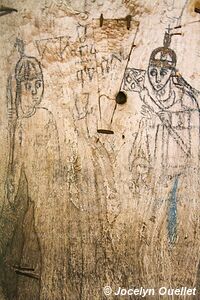 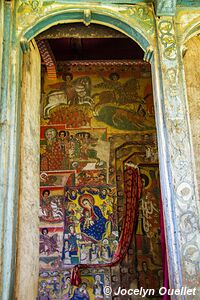 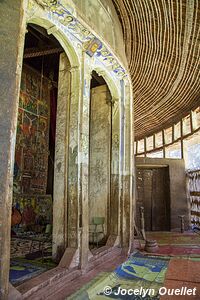 Artists were drawing a draft on the exterior walls before painting inside. 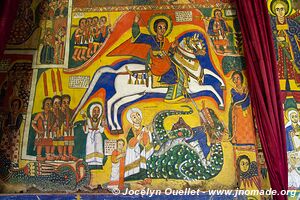 St-Georges killing the Devil (Evil symbolized by a dragon). 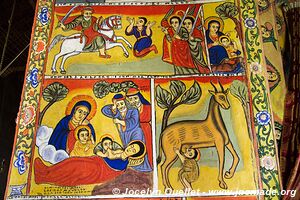 Weird? Jesus feeding on an antelope. 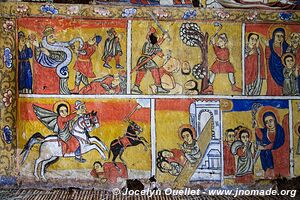 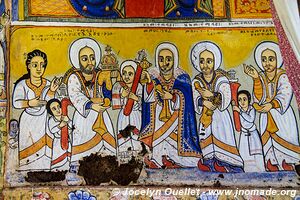 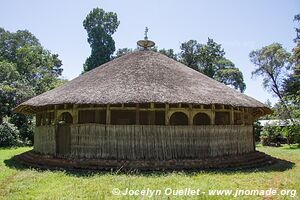 Aswa Mariam Church is another church with fascinating paintings. You can notice that a style seems to have been followed. 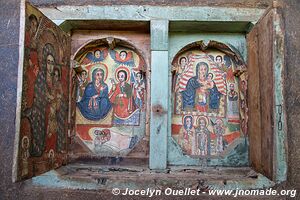 Panels of a window. 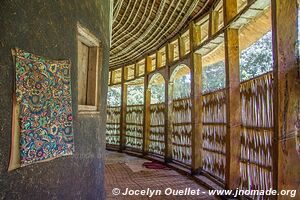 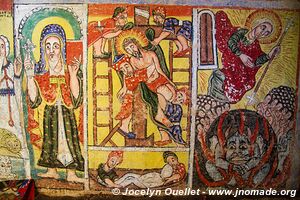 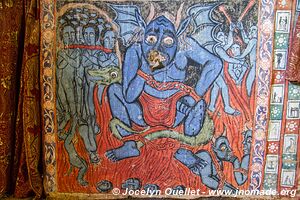 Images of the devil are very present. 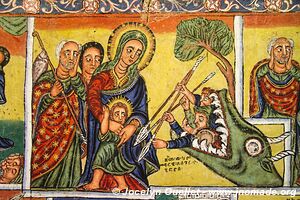 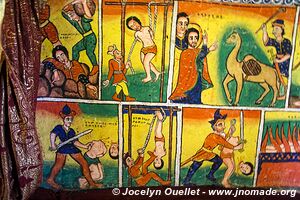 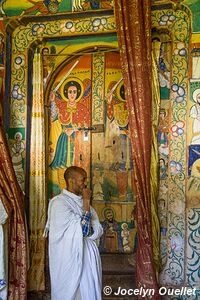 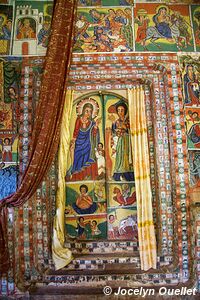