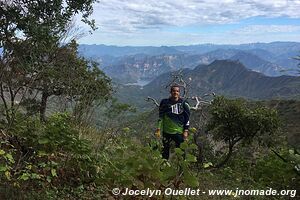 The Copper Canyon (Barrancas del Cobre, in Spanish) is a series of canyons located in the southwestern part of the state of Chihuahua. Six canyons and as many rivers merge together to form the Río Fuerte (strong river) and empty in the Gulf of California (also known as Sea of Cortez).

To explore the region, I chose to drive trails, sometimes difficult, in the back country. My itinerary has been El Fuerte - Choix - Tubares - Cerocahui - Urique - Batopilas - Divisadero.

All along my itinerary, the scenery has been fantastic. Without doubt, the whole region will be among my top 10 when this trip is over.

Here is the first part of my journey through the Copper Canyon. 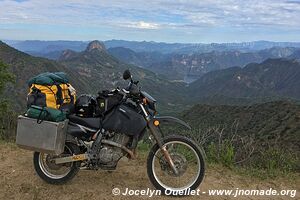 The main difficulty has been to find the trails that would allow me to cross the entire region without problems. In the forums, on the Internet, some people give a text description of some routes. Thus with a bit f perseverance, I managed to plan a route through the canyons.

There are also a few persons describing these trails as very difficult. Of course, after a strong rain, a few sections could become extremely difficult. The communities and local governments maintain some sections of the roads, thus the quality of the road may vary from year to year or from month to month. 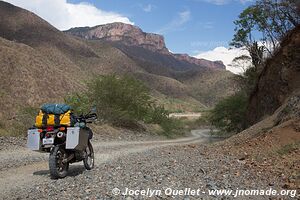 I managed to drive all the routes without major problems; I dropped the bike once. My experience was excellent and despite the fact I was alone, everything went right. In October, the rains have generally stopped and the road was good.

The experience I got driving the Trans-America Trail with Thierry and Alvaro, probably helped me to appreciate the itinerary I made. Without this experience, I would have been more afraid to drive these trails. 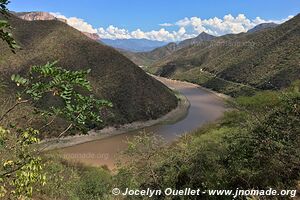 A few kilometres before Tubares. 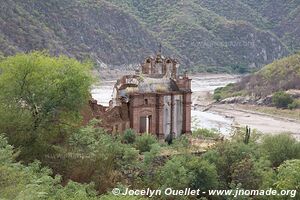 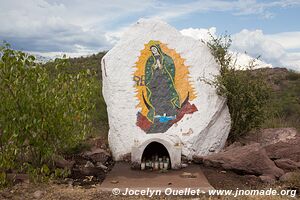 Small chapel along the road. 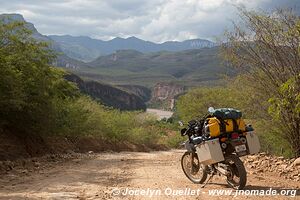 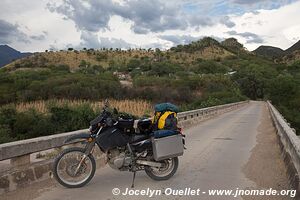 After a long day with superb landscapes, here I am on the bridge next to the village of Tubares.

It was getting dark and I needed to find a safe place to sleep. This region is known to be an area with a lot of drug dealers. 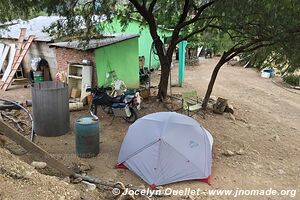 Camping at a family's house.

Here is my campsite for the night. In the village, I asked to the people of this house where I could safely sleep. They invited me to sleep on their land. 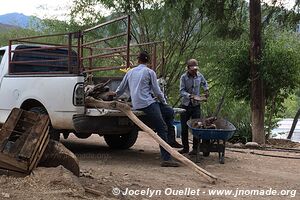 The two sons of Monserrat. 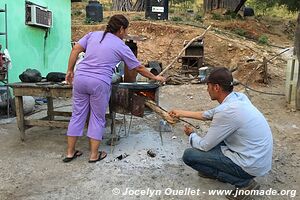 His wife preparing the dinner.
The family was very welcoming. They invited me for dinner while showing me how to prepare tortillas. 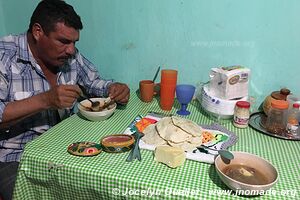 Monserrat offered me this tasty meal. 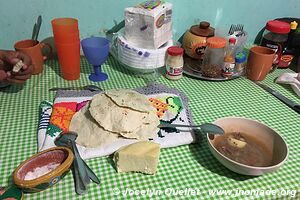 Corn tortillas, meat/potato soup, cheese and salt.
I ate an excellent meal with Monserrat, the father in this family of two children.

The view in front of their house.

After Tubares, it is possible to drive to Urique or to Batopilas. The road to Batopilas would force me to cross this river at a place where there is no bridge. With that much water, you will understand my decision to take the road to Urique.

I had an excellent night in Tubares. It was a quiet night... except for a few gun shots I heard late in the evening. Monserrat told me it was the neighbour who loves to shoot in the air when he is a bit drunk.

We can vaguely see, in the distance, the river that flows through Tubares.

Scenery a few kilometres after exiting the village.

Small detour to explore the city of Cerocahui.