The landscapes in the first part were fantastic, but those I was about to see after Cerocahui were even more impressive. 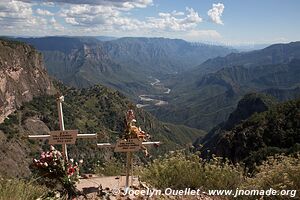 A few kilometres after Cerocahui, I reach a first spectacular viewpoint. The gravel road follows a cliff that is several hundred metres deep.

There is no protection barrier along the road. These two crosses are a good warning to what could happen if someone is not careful on this type of road.

The cliff doesn't appear very steep on the picture... It's far from the truth, the slope must be above 70%.

Far away, near the river, lies the village of Urique some 1000 metres lower. 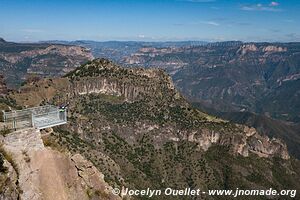 Further along the road, there is a viewpoint called Mirador del Gallego. The view is simply spectacular.

Photo taken with the drone.

The village of Urique can be seen along the river. 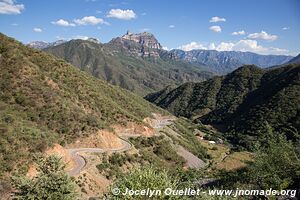 From the Mirador del Gallego, the road down to Urique is dizzying. As the crow flies, the GPS give a distance of 3.5 km to reach Urique. The road has so many twists that the drive is actually closer to 14 kilometres and down by 1000 metres to reach the village.

Vehicles must have good brakes. With the bike, I had to use the engine brake (in first gear) and both brakes for most of the drive down.

The last kilometres before reaching Urique...