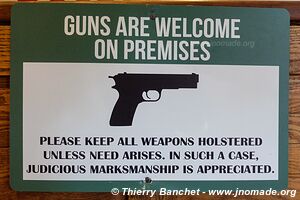 The United States is the best country for guns. Many Americans claim high and loud their right to have a firearm. Indeed, in the American Constitution, the 2nd amendment says that any American has the right to have a gun... When the constitution was created, this right was added since militias were necessary for the protection of the country. Nowadays, with the police and all the other government groups, is the amendment still needed?

It is very easy to find guns in the country. In several states, the only control is to check that you are not on a black list. You could be on that list because of crimes, mental illness, drugs, etc. In short, with a computer, they check your identity against a government database. A few states enforce gun licences.

Your ID control doesn't come out bad... Excellent! You can now buy as many guns as you want. Whatever you buy is not listed in any database. You can buy 100 guns if you so desire. 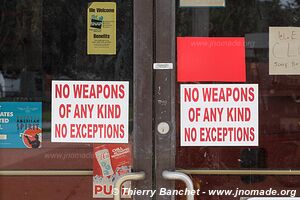 At any time, you can buy accessories without the need for any control; boxes of bullets, chargers, powder to make explosives, etc. Also, there is no control if you sell a gun on the street.

Could I buy a gun? In principle, no, since I am not an American citizen or resident. In fact, the seller could have bought it from the store and sold it to me on the street... 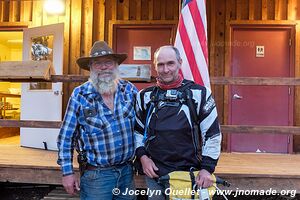 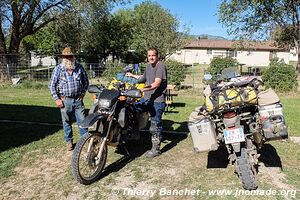 Here are Thierry and Jim Brandt, the manager of a campground and a gun enthusiast. Jim is an old friendly cop who loves guns and proudly wear one. Look on YouTube, there are a few videos on him showing various guns tricks he does.

Jim said he would never come to Canada... since they don't allow him to wear a gun... 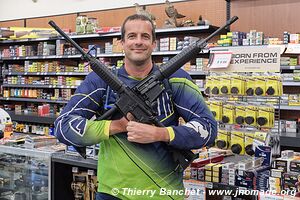 We visited a store that sells a bit of everything; clothes, food, cosmetics, hardware, and also guns. We took some time to learn and look at guns for sale.

On this Rambo shot, I carry two semi-automatic firearms. One of them is a replica of a military assault gun; the M16. This version of the gun has only one modification, the setting '3 shots per pull of the trigger' was removed.

Thus, this gun shot only one bullet every pull of the trigger. However, since it can be activated as fast as one can and a charger has 30 bullets, it is possible to shoot at a rate of 30 bullets per 10 seconds. And since you can buy as many chargers and bullets as you want, you can imagine what could happen. 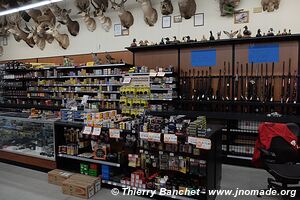 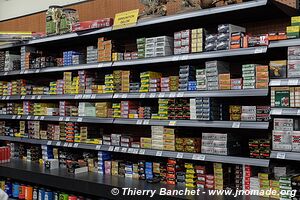 The quantity and variety of bullets for sale are impressive. If bullets are too expensive for you, you can buy the powder and the shells to make your own bullets. 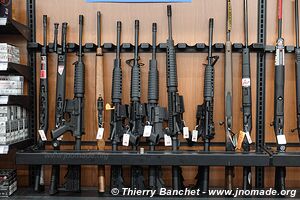 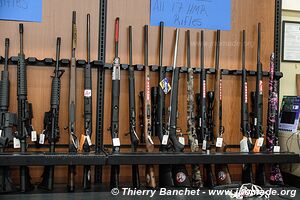 This store doesn't have a great selection. Indeed, the salesman told us that he doesn't have the licence to sell powerful guns. On the shelves, under the counter, there is a selection of handguns. From the small gun that can be hidden in a small purse to the Clint Eastwood cowboy handgun. Notice the rightmost gun on the right photo: it is coloured black and pink, for the lady. 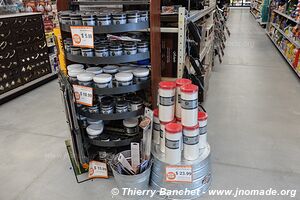 The powder is inactive as bought. It must be mixed with two different products (sold in the same box), and shot with a high-power gun. And boom!

Unrestricted sale over the counter. I could have bought a few boxes.