« On the road » is a title I use for a series of photo without any precise theme or to group several topics in one blog. They are photos taken while the miles pass without any goal, some chance encounters...

I am always surprised about the number of Africans that must fetch water using canisters or drums. It is a lot more frequent than I would have imagined.

Every morning, a big number of Africans travel to a well or a lake in order to get water for the day (or for a few days). Some of them seem to walk for several kilometres in order to get some. 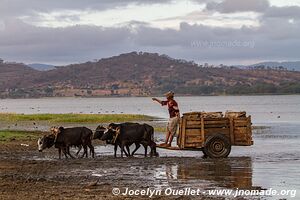 A woman came to fetch some water at Lake Babati.

I have seen several methods for transporting water: 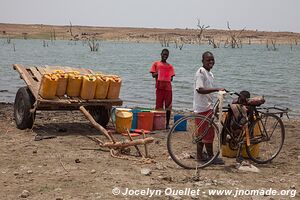 I even saw people fetching water from a dry river bed. Only sand can be seen, but people dig a hole in the river bed and water is then available (I have seen elephants doing the same in parks).

They are poor people, of course, but it is still not like pictures we get from World Vision where people seem to suffer, packed in refugee camps. It is their everyday reality, but sometimes I think it is not necessarily worse than enduring an hour or two of daily road traffic just to go to work. 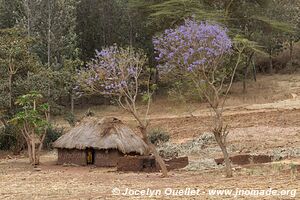 Another striking feature of Tanzania is the number of villages and houses without electricity and running water.

No need to go very far, I see this very often. Even around a large town or city, there is often « suburbs » without electricity.

It is part of the normal life of an African. 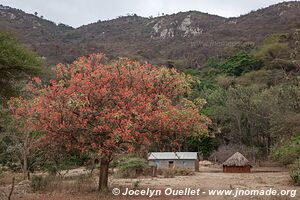 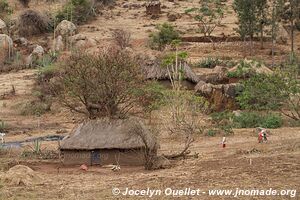 Another viewpoint. The white area above the vehicle is a dry lake.
Previous post
From very very close
(Tanzania)
Back to visited regions
Next post
On the road #2
(Tanzania)
Copyright © 2010-2023 Jocelyn Ouellet. All rights reserved.