In this article, I don't pretend to exhaustive information on the genocide. I will try to give you an outline of the events to help you understand the history of the country.

The genocide is covered in a lot of books and many movies such as 'Shake Hands with the Devil' (the story of general Roméo Dallaire), 'Un dimanche à Kigali' (a Quebec movie) and 'Hotel Rwanda' (a controversial film regarding its veracity).

I encourage you to search the Internet in order to find more information.

Twas are the aboriginal people of Rwanda (like the Amerindian in North America) and have always been second-class citizens. They were hunters-gatherers that have slowly lost their land to the hand of Hutus and Tutsis who were, respectively, farmers and cattle raisers.

Tutsis have always been less numerous compared to the Hutus, but they formed the elite group of the society. They were cattle raisers generally richer than the Hutus. They were running the country through kings and controlled almost everything. Physically, Tutsis were apparently taller and prettier than Hutus.

Hutus were farmers accounting for nearly 80% of the population.

Before the arrival of the colonists, these three ethnic groups used to live in harmony and all spoke the same language: Kinyarwanda. This theory is controversial... There was probably some tension between each group since Tutsis were controlling all the country...

Then, the Belgian colonists arrived. They started to differentiate the three groups and created identity cards for each ethnic group. They favoured the Tutsis by giving them better access to school and administration jobs of the colony... This favoritism has without a doubt contributed to the resentment of the Hutus against the Tutsis.

After independence, the Hutus have started to organize themselves and they wanted to promote their own people to the detriment of the Tutsis. The Belgians have even changed side to support the Hutus after the independence. They probably sided with the side of the majority in order to preserve some power.

The escalation of discrimination and violence had started many years before, but seems to have taken off considerably after independence. In brief, the Hutu politic party has replaced, little by little, the Tutsis in power and has established a repressive regime against the Tutsis. Among some Hutus, there were fanatics that were advocating nothing else than the elimination of the Tutsis. There was a lot of negative propaganda against the Tutsis.

Some Tutsis, who fled the country, started to attack Rwanda in order to stop this rising discrimination. The Hutus, from their part, started to fight back by killing thousands of Tutsis. The escalation continued through until 1990.

In 1990, a Rwandan force in exile in Uganda attacked Rwanda with some success. From that moment, Rwanda (the Hutus in power) started taking the threat seriously. A few foreign countries have helped Rwanda to defend itself against this aggression. This civil war lasted until 1994.

A night of April 1994, the plane of the Rwandan president was shot down and hostilities (the genocide) started. The army and Hutus militias have started a systematic slaughter of all the Tutsis as well as moderate Hutus. The moderates were those that promoted Tutsis and wanted to live in peace with them. In less than three months, around one million people were slaughtered with guns, grenades and machetes.

These attacks have been planned by the people in power and militias have been trained to kill Hutus (they were helped by France who still deny the existence of the genocide). It is the Rwandan army in exile that managed to stop the massacre and overthrow the Hutu government (3 months after the beginning of the genocide).

General Dallaire was the chief of the UN mission that was trying to keep peace in the country. The general had been informed that a slaughter would happen by a high-ranking leader of the Hutu government. He did inform the UN which chose to ignore the threat and pretend that everything was going well.

At the time of the massacre, the UN could have minimized the impact of the genocide, but it rather chose to lower its workforce from 2500 men to only 250. In addition, they were not authorized to intervene.

You can understand how this man can be suffering from all this... He knew about the coming slaughter, but the UN forbade him from intervening. He was even tried by the military tribunal for disobeying an order from the UN (he chose to stay and help the best he could).

A report from the Rwandan government concluded than Rwandan children have been affected by the genocide as follows:

There is a lot more about the genocide and you can search for yourself. You could try to find info on the following aspects: 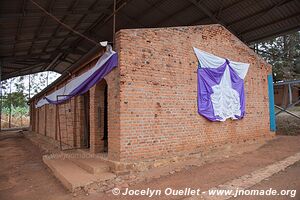 Everywhere, where a massacre has happened, the site has been converted into a memorial. Every year, Rwandan people commemorate this sad event.

Nowadays, there are no more identity cards with the ethnic group of people. They try to live in harmony.

Everything seems peaceful in appearance, but the overpopulation in Rwanda, the huge quantity of children and little land left for agriculture, what will happen in the future? There will be a lot of difficulties to overcome. In addition, the guilty people of the genocide are now out of prisons. Once again, the victims are meeting the killers in their own village. 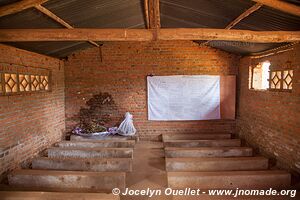 This picture is very difficult to look at when one understands its story. The massacre of Tutsis happened in a very cruel way. On this photo, one can see a dark stain on the wall. The killers killed children by throwing them on the wall. On the right, messages have been written by other children for the victims. 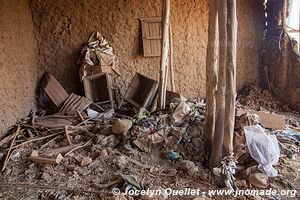 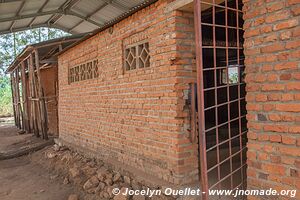 The sites, where a massacre happened, have been preserved without any changes. 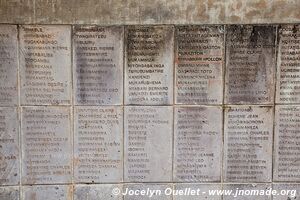 In this church, where a massacre occurred, the names of a few victims have been written down. Several victims will never be identified since whole families have been decimated... there is no one left to identify the dead. 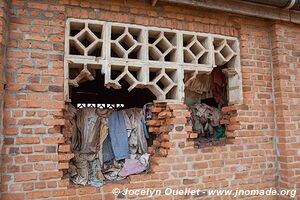 Most victims were buried in a communal grave. Here, one can see the clothes salvaged from one of these graves.

Inside, there are many skulls and bones from victims. In another site, there are whole corpses preserved with lime lying down on the floor. The goal of the government is to make the people understand that such a massacre should not happen again and that people should remember the numerous victims. 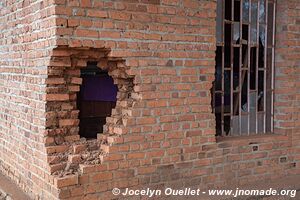 Blast of a grenade. 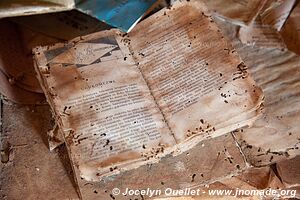 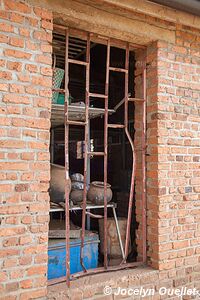 Several massacres have occurred in churches. In previous conflict, people were hiding in churches were spared... But not this time, the killers slaughtered everybody, regardless of where they were. 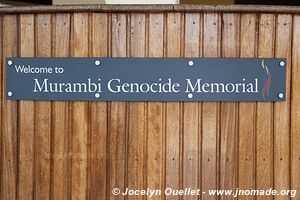 At Murambi site, there is a small museum about the genocide.

One can see the letter that general Romeo Dallaire sent to the UN to warn them about the threat hovering over the Tutsi people. 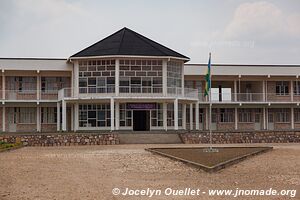 One can also learn that many of high-ranking officials, directly involved in the massacre, have never been tried for their crimes. Several of them went into exile in the neighbouring countries (in Congo for example) and a few even live in France. 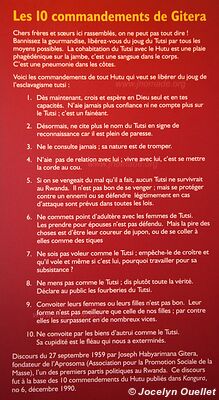 Here is an example of the negative propaganda against the Tutsis that was accepted by the government. These ten commandments have been taken from a speech of a leader from one of the most important political parties at that time.

Take time to read it, it is truly horrible. (It is written in French)

Back to visited regions
Next blog
Craft and dance
(Rwanda)