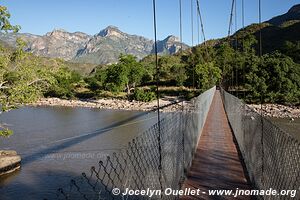 Up to now, the trail from Urique to Batopilas, has been the most difficult one that I drove in solo. Before starting the trail, I knew that the first part would be the most difficult. A few 4x4 vehicles use it, but it is very rare. The local people mainly use quads. 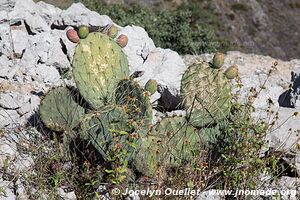 Just outside Urique, the road follows the river for about 7 kilometres. It is enough time for the bike and the driver to warm up before starting the mountain. 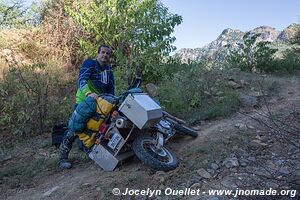 The mountain trail has begun a short while ago. The climb is rather difficult because of its steepness and all the rocks.

I fell only once on this trail. Here a small video on this fall that was of no consequence. 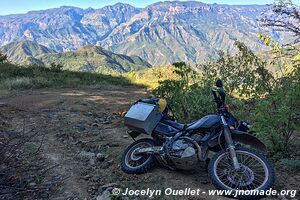 The DR650 (my bike) is not the most comfortable on the road. It is also not the best one on the trail. However, in addition to being reliable, it is relatively light for an adventure bike. Thus, I can't lift it by myself... A very important fact.

If a person can't lift his bike, he can always remove the bags and the panniers. The problem is that it can take up to 1 hour to remove the luggage, lift the bike, and replace everything, instead of maybe 10 minutes.


The art of falling and getting back up

Several times while driving up, I wondered if it would be better to turn back. However, going down could have been even more difficult than driving forward. Indeed, to use the brakes in a rocky terrain is a bit perilous.

Once the hardest part was over, I was able to enjoy the magnificent scenery. 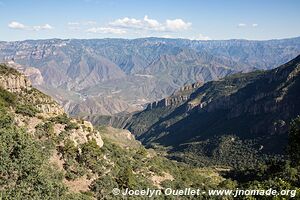 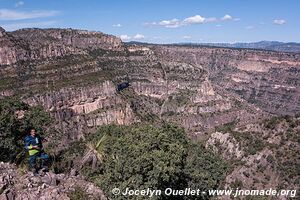 Notice the trail snaking its way on the mountain. It can be seen very far away in the middle of the photo. It's the trail I took.

Seeing this in person is so much better than this photo can convey...

Only 5 kilometres to go before I reach the village of Batopilas. I end up in front of this nice river flowing over the concrete bridge.

Tired of my day, I don't even take the time to check how deep is the water along the bridge. I drive forward, and I cross the river without any problems. However my boots get filled with water. 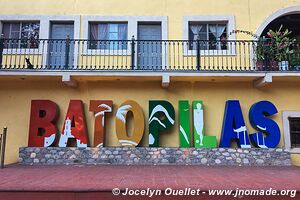 I reach Batopilas at the end of the day, tired, but very happy about my itinerary and the magnificent landscapes I have seen.

Just after entering the village, I come face to face with a group of Mexican bikers. Right away, they invite me to a dinner with them. I had a great evening with them. 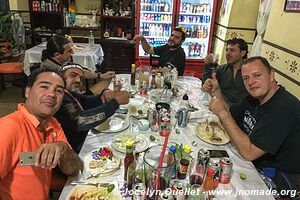 They all are from Mexico City. I saw three of them again during my stay in the city. In fact, I stayed a few days at Juan's apartment (orange t-shirt). He was a very welcoming host, and he helped me a lot for the bike.

Indeed, once at his home, I noticed that my luggage rack was broken. We removed all the luggage, and we went to a welder to repair the problem. It was also Juan that helped me to buy new tires. 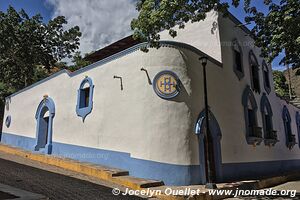 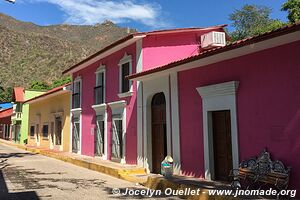