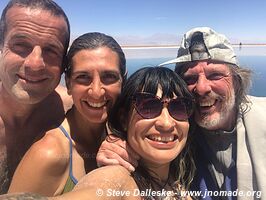 Bikers I met in San Pedro de Atacama. From left to right: Caroline, Priscilla and Steve.

In San Pedro de Atacama, in the Chilean desert, I met Steve and Priscilla, a couple from California. They bought motorbikes in Peru and want to go down to Ushuaia, in the Tierra del Fuego. I also met Caroline, from France, a solo traveller that bought her bike in Colombia and plans to do a big loop from Colombia to Tierra del Fuego and then return to Colombia to sell the bike.

Together, we went to the Laguna Cejar, near San Pedro. The laguna salinity is so high that it's very easy to float to the surface of the water, without any effort. It's so easy to float that crawl swimming is hard since our butt floats too high up in the water, and that our arched back hurts as a result. An incredible experience that must be tried! Unfortunately, this nice experience had a price. We stayed less than two hours around the laguna, but my white back has been burned by the sun and I was as red as a lobster in the evening. 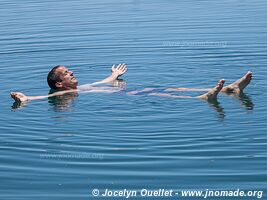 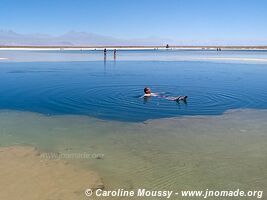 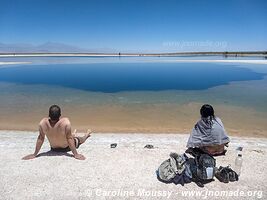 The Laguna Cejar in all its glory. 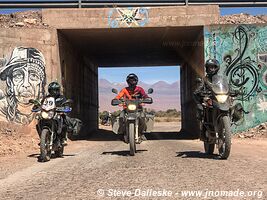 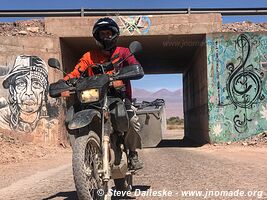 Going back, Steve did a small photo shoot of us. 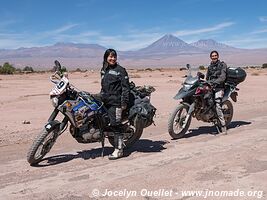 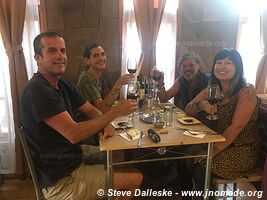 A nice dinner between bikers. 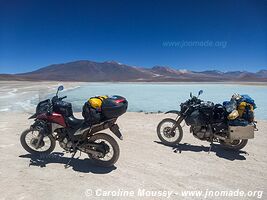 This small detour through Bolivia wasn't planned in my short-term itinerary. I had planned to do the Lagunas Route and the Uyuni Salt Flat only after I went through Argentina and Brazil. For her part, Caroline was planning to continue through Argentina and down south. However, we had the chance to share the road for a few days and to help each other on a route that has the reputation of being difficult due to the altitude and cold, as well as the roads with so many washboards and, worst of all, a lot of sandy sections. 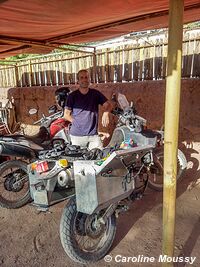 Getting ready for departure.

After some discussions and hesitations, we finally decided to do some exploration together. We had to be sure to have enough fuel for the entire road, and to be sure there would be no problems after the protests that resulted in the ousting of the country president (Evo Morales) a few weeks before.

As a matter of facts, in the previous days, several violent protests have taken place throughout the country; borders temporarily closed, blocked roads, and also lots of vandalism. To try to force its way through a blockade could have some nasty consequences; at the best, getting the tires punctured, at worst, getting beaten up by an angry crowd. However, before of departure, the country seemed to have calmed down, and in retrospective, we did have any problems.

This detour through Bolivia is detailed in the next posts.