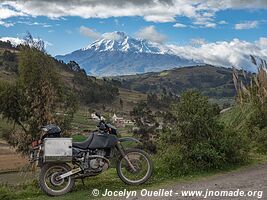 The Chimborazo volcano is the tallest mountain of Ecuador at 6263 metres. Due to the shape of Earth, the Chimborazo is both the furthest point from the centre of the earth and the closest point to the stars.

The Everest is the tallest mountain in the world, but only if measured from the sea level. However, because of Earth's equatorial bulge, it's the Chimborazo that wins if the measure is done from the centre of the earth. Interesting fact, isn't it? 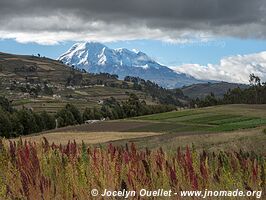 I didn't try to summit the mountain. Even if I had wanted to, the strong winds blowing on the volcano were preventing any expeditions. When I got to the volcano, winds estimated at 120 km/h have been blowing for nearly two weeks.

The Chimborazo is hidden in the clouds. 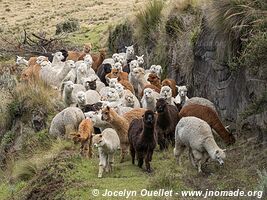 To reach the base of the Chimborazo volcano, I drove on the Trans-Ecuador Trail. Less than a kilometre from my destination, I was greeted by theses magnificent animals. They are alpacas and not llamas.

When I was taking photographs of the alpacas and the farmer, I was wondering if he would be unhappy about it. Not even close! After the animals were gone, the farmer approached me and we greeted each other. He asked me where I was from, and he welcomed me to Ecuador. 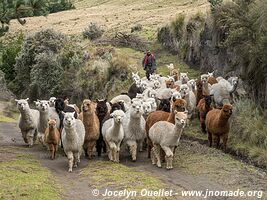 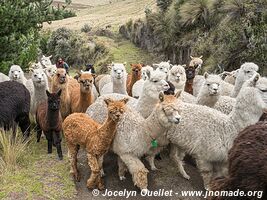 A Small Paradise for Rock Climbing 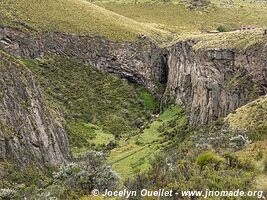 Seen on this photo, the Chorrera Canyon doesn't seem very impressive. In fact, the canyon is two kilometres long with walls reaching up to 100 metres. 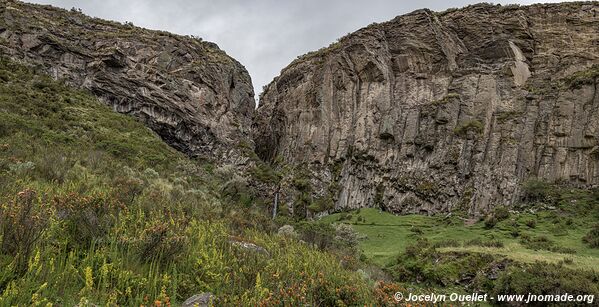 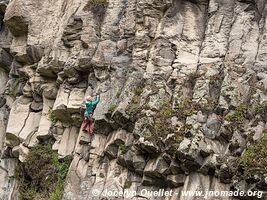 Notice the person on the wall.

In addition to being very nice, the canyon is a small paradise for rock climbing. There are more than a hundred routes already established on the wall. The difficulty varies from level 1 to 8c and more... for those that understand such ratings.

During my hike in the canyon, three fans of rock climbing had come from Quito for a weekend of climbing. 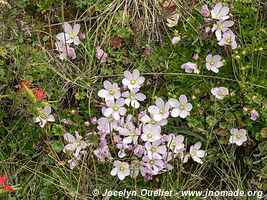 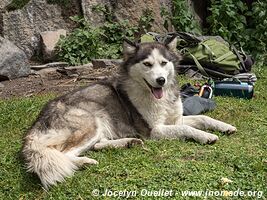 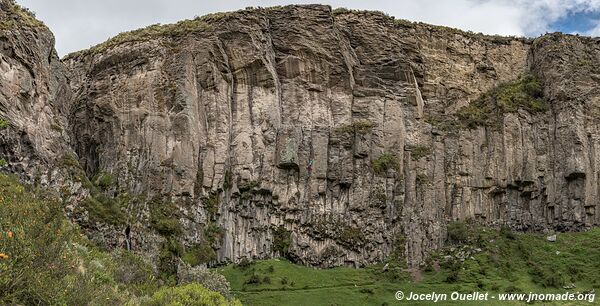 A person (even two) is visible on the wall. The route they choose stops in the middle of the wall. The upper half of this wall is very difficult technically. 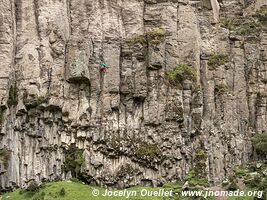 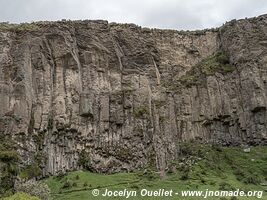 On theses walls, there are more than a hundred climbing routes.

The canyon with the Chimborazo volcano in the background. 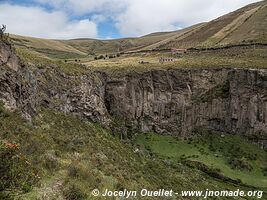 Above the canyon, it's possible to stay or camp at this lovely inn. In my case, I chose to lodge in the inn since the strong winds would probably have damaged my tent. 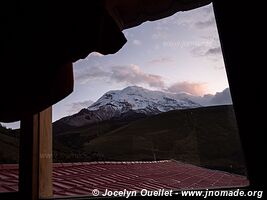 The view from my room was fantastic. 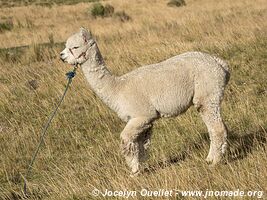 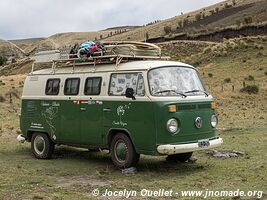 Two Argentinians are driving the Americas in this old Combi. It's a T2 Volkswagen van.

The inn is well located. 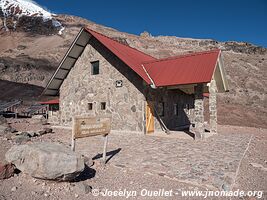 The Chimborazo wildlife reserve was created to protect wild vicuñas. The vicuña is one of the four species of camelids of the Americas with the llama, the alpaca, and the guanaco. These animals are cousins of the dromedary and camel that are also camelids.

At the heart of the reserve, the superb Chimborazo volcano offers a fantastic sight. During my visit to the mountains, I climbed to the Whymper Refuge at 5000 metres, and also to the laguna Condor Cocha à 5100 metres. The effect of the altitude was quite strong, and the winds were powerful enough to unbalance me during the hike. Imagine how it would be at the summit! 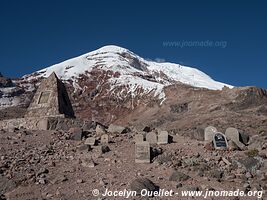 A reminder that the mountain can be a very dangerous place. These are the tombstones of people who died on the Chimborazo volcano.

Back to visited regions
Next post
Salinas de Guaranda
(Ecuador)