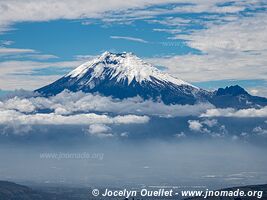 The Cotopaxi Volcano is a magnificent symmetrical cone covered by a glacier. To see this awesome summit in all its glory requires a bit of luck since it's often hidden in the clouds. In addition, since motorbikes are not allowed in some parks of Ecuador, it was more complicated to explore the area.

The Cotopaxi towers at an altitude of 5897 metres, only 1 metre more than the famous Kilimanjaro in Tanzania. It's the country's second-highest summit after Chimborazo. Its last eruption lasted from August 2015 to January 2016. In the end, it only spited thick clouds of smoke and vapour. Since 2017, it has reopened for hikers and climbers.

I had a few superb views when I was outside the national park, but only a few hours. I have seen it from the town of Pujilí at the end of the day, but I had the chance to see it again after my week at Laguna Quilotoa. On the photos below, I am about 43 km away from the volcano.

The Cotopaxi on the right, and the Illinizas Volcanoes on the left. The two volcanoes are about 16 km away, and have heights of 5248 and 5126 metres. 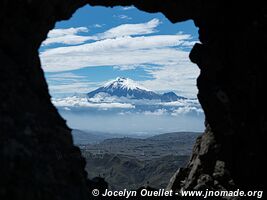 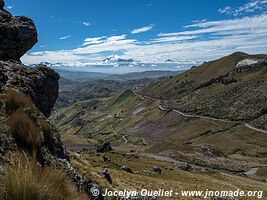 Back door to the Cotopaxi... 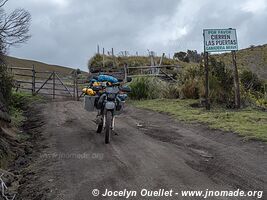 Since motorbikes are not allowed in the park, I tried to follow a mountain bike path that goes around the mountain via small roads and trails.

The first kilometres were easy, but the closer I was to the volcano, the road was getting worse and worse. 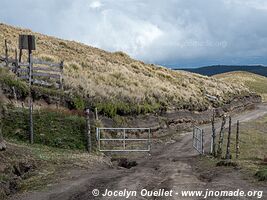 There were several gates to cross. 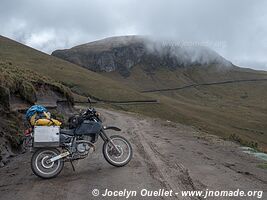 The beginning of the end. I had to continue on the small trail on the right. After a few hundreds metres, the trail vanished in the páramo (in the field).

I think it could be called a huge land. 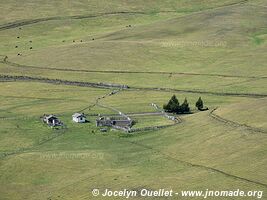 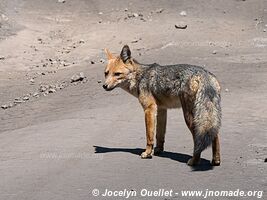 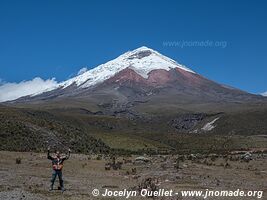 During my first visit near the entrance of the park, it was very cloudy and I didn't try to enter the park. However, 4 weeks later, I passed again near the Cotopaxi National Park and I had the chance to have a superb sunny day.

Once I reached the entrance, there were four Dutch people waiting for a pickup truck to do a tour in the park. I was able to join them and have a little excursion to the Jose Rivas Refugio at 4864 metres.

The four Dutch and our guide. 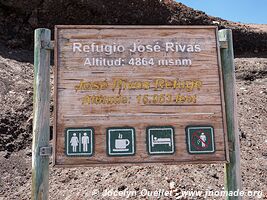 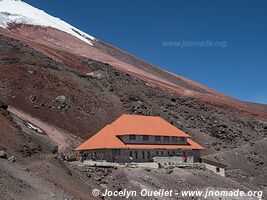 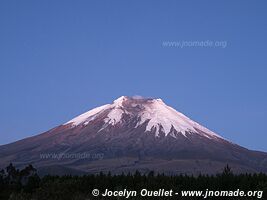 After leaving the national park, I went to the village of Lasso, at the foot of the Cotopaxi Volcano. At the end of the day, there were no clouds on the Cotopaxi, and I went to look for a nice place to see the sunset. A few kilometres from the village, I found the perfect place.